Today is the start of the last week of WTT67 as next Sunday we enter the wonderful, wacky world of Night Tube, indeed one of the LES Mafias has already out up duties for the week ending 13th August.  Chris Taggart's objections were overruled on Tuesday and according to the report of the RMT National Executive Committee the Victoria Line “have had their roster issues amended” although I’ve not heard if the amendments meet the approval of the TOps on the Victoria Line.

We are told that LU will be "managing the noise and vibration issue that Night Tube presents to many residents living above or near the Tube".  Apparently the Central Line Track Team have installed "resilient track fastenings" which act like shock absorbers to muffle sounds at "key rail noise locations".  Obviously this will have no effect on the train whistles as they go in and out of LOU, HAI and WHC at regular intervals throughout the night.

Yesterday when I Googled "London Underground" and "news" I was presented with a story about a fight at York Hall in Bethnal Green which ended with a man being fatally stabbed on the forecourt of a BP petrol station.  Most news agencies described the incident as taking place "outside" the Tube station, with the Daily Mail describing “massive puddles of blood”.  It is higly unlikely that any Mail reporter actually went to the scene to verify this as if they had they might have noticed that both York Hall and the BP petrol station are a good 200 yards up Cambridge Heath Road from BEG.  Sadly this is just one example of many over the years where reporters seem eager to link the Tube with any negative story regardless of how tenious that link may be.

On the subject of "inaccurate" journalists I have been told that recently a pair of reporters turned up at an address in East London wishing to "doorstep" a senior union official at his home about an upcoming strike.  When they discovered he wasn't there they proceeded to question the lady who answered the door about her opinion on the subject and when she asked how they'd come to have that address they told her they'd been given it by the union.  This seems highly unlikely as while the lady in question was once in a relationship with the union official they separated more than a decade ago and she moved to that address after the separation so he's never lived there.

Obviously things are harder than they were back in the days when if the newspapers wanted to know something they just hacked your phone......

WTT69 is due to be introduced on the Central Line from Sunday 7th August to allow a test run of Night Tube services on Friday 11th and Saturday 12th with services to commence on Friday 18th.  Last week we were told that the new rosters had finally been agreed and that Night Tube was good to go but it seems that not everyone is happy.

Central Line General Manager Chris Taggart thinks there are too many DMIs (Duty Manager’s Instructions) where TOps become “spare” at the end of their shift although as I mentioned earlier the Duty Manager’s instruction is normally “sod off home”.  What makes this slightly bizarre is that the agreement was signed off by managers further up the chain than Taggart so effectively he’s arguing with his bosses.  There’s going to be yet another meeting over this and we should know what’s going on later this week.

Despite all that it seems that things on the Central Line are positively rosy compared to the Victoria Line where once again DMIs seem to be an issue although in this case it’s not management but the unions who are arguing against them.  I am told that at Brixton there is a local agreement that TOps work a maximum of five “rounders” – Brixton to Walthamstow Central and back – on a duty but some duties on the new roster have five rounders with a DMI on the end which means they could be asked to do a sixth rounder.

The situation has got so bad that RMT are balloting for strike action while I’m informed that the local ASLEF reps at Brixton and Seven Sisters have resigned en masse because they don’t feel they are getting enough support for the Functional Reps.  One suggestion is that this could go to ACAS with a six week “cooling off” period but that would mean Night Tube on the Victoria Line being delayed until September and whether they’d go ahead with Night Tube on just the Central Line is questionable.

If I've got any of the facts wrong please feel free to correct me, I'm simply reporting what I've heard around the depots (and I only got back off Annual Leave yesterday).

Alfred Hitchfox is doing well, I saw him picking through a box of KFC yesterday
at 10:27 2 comments:

I’ve checked WTT69 and it seems that a lot of the depot/sidings moves I mentioned yesterday are actually stabling trains before our “normal” finish time but there will be 26 depot/siding moves between our “normal” last and first trains on a Friday night/Saturday morning; five starts, five finishes at HAI, four of each at WHC and LOU.  LOU and HAI are right in the middle of housing estates so I suspect the number of complaints to TfL from residents there, along the Open Sections of the Central Line and next to Northumberland Park depot on the Victoria will significantly rise after the second weekend in August.

I met Alfred Hitchfox in the staff car park yesterday as I was going home after work, I'm informed not only does he have a taste for pigeons but he's also doing his bit to reduce the local rat population and seems to enjoy digging up the flowerbeds of the Train Crew garden. 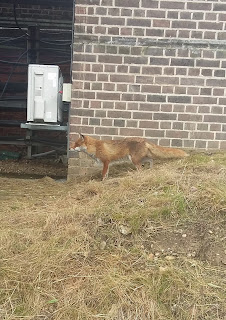 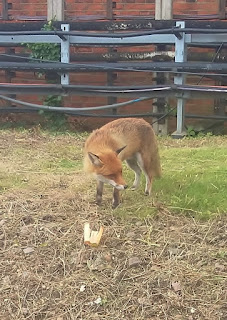