Not much to report, the warmer weather seems to be encouraging more people to stay up in town after work, something I used to do in the summer back in the distant past when I myself was a M-F 9-5 commuter-type. Consequently the last trains are slightly more crowded though the passengers seem to be a lot happier that time of night; hooray for alcohol!

The influx of new TOps doesn't seem to have been evenly distributed as some depots still have duties uncovered; last week I had to go to HAI to put a train away as had the spare who was driving it finished the duty they would have gone into overtime. There are more new TOps training and I assume they will fill the gaps in the next month or two. Touching on the Olympics RMT have come an agreement and all we are waiting for now is the duty sheets to go up so we can find out when we’re actually working.

And finally I’m happy to announce that the banner covering the Hanbury Street Crane has been removed. Thank you, Tower Hamlets Council, for showing art the respect it is due.

Back from Annual Leave and straight into utter chaos. At BEG someone was “tired of London” and had jumped down on the track but rather than a train arriving at speed BTP arrived at a more leisurely pace down the escalators. Realising that his attempt to end it all by mass transit system had been thwarted he produced a knife and tried to disembowel himself, all rather messy according to the reports.

Meanwhile three scallywags purloined a car, failed to shake off their pursuers, abandoned the stolen vehicle at RED, fled into the station and then scurried off down the tunnel towards GAH. The police sent search parties up both the EB and WB tunnels to make sure they didn’t double back through a cross passage, successfully herded the miscreants up to GAH and into the clutches of the police waiting to take them into custody.

Our staffing problem has been solved with the arrival of loads of new TOps one of whom was about to start his “sweat day” as I was getting off my train this morning. Sweat Day is your first on your own, without an IOp or a manager on the train to monitor you, thus the expectancy of nervous perspiration. Mine was easy but by the time I got around to it I’d spent half my 16 weeks training learning how to drive the train and all the possible routes I could be asked to do but the latest lot only had 12 or 13 weeks in total, it seems that the 8 weeks I got have been halved in a bid to save time and money.

Reports are that this wasn’t particularly successful on the Piccadilly where a lot of new TOps had to be sent back for more training. Similarly on the Victoria Line the TOps there were only given 8 days training on the new 09 stock and I’m told that a lot of the problems suffered when these trains were being introduced were down to unfamiliarity with the new stock. I believe the phrase is “false economy”………

A totally non-Tube related post before I return from my two weeks off in which I have achieved the square root of sweet F.A.

Brick Lane and Spitalfields has been one of my favourite haunts since the late 70s when I purchased my first pair of DMs at Blackman’s in Cheshire Street. In the last decade it has become a centre for street art which attracts a large number of tourists, one of the finest being the crane on the side of 49 Hanbury Street. 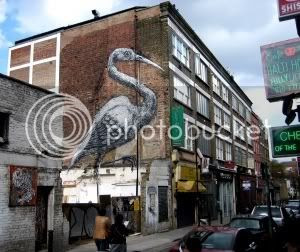 Tower Hamlets Council in their wisdom have decided to mask this with a banner and there is now a petition to have the crane visible once more which I have signed.

I’ve been keeping tabs on things while away from work and spotted an interesting story on the Epping Guardian site. While BTP were investigating a cable theft in the wee small hours of Sunday morning they found a badly burnt bodywarmer and woollen hat near the track at THB. The 65ft of cable that had been removed was also found in a field nearby.

I’m off to make a bacon sandwich, not too crispy……..

The duty sheets for the Olympics have appeared and from a quick perusal it appears that on weekdays there is only one late shift that finishes after 01:30 and qualifies for the extra payment. I didn’t check what the situation was at weekends or how many of the weekend shifts are longer than 8 hours but ten shifts during the Games themselves and another five during the Paralympics split between the 120 or more TOps at my depot means that the majority of us will be getting the £500 bonus and little else. Perhaps the Daily Mail, The Sun and all the other Tory rags that were howling in indignation about us getting an extra £1800 or whatever for working the Olympics will make up the shortfall.

Indeed it could be the case that no one gets anything more than the £500. We are all being sent a memo from management where we will be asked to indicate whether we are willing to work the longer and later shifts or not but there is a rather disturbing bit in the blurb that goes along with it which states:-

“it is expected that Train Operators who volunteer for enhanced working would not undertake mutual changeovers, one to one or via a syndicate”.

If you’ve been following this blog for a while you’ll know that I don’t particularly like doing earlies or working down the W&C to the extent that I recently joined a “Mafia” in order to avoid those shifts. As we probably won’t know what duties we will be doing until about a month before that means that if I tick box saying I’m willing to work the longer or later shifts I could end up with two weeks of earlies with some down the Drain while for others it could mean working lates or nights that they don’t want.

So what seemed to be settled is now up in the air again thanks to management sticking in a line of text that they must have realised would be a problem for a lot of TOps.

I’m off for two weeks, no doubt there’s going to be all hell breaking loose while I’m away but frankly I could give a monkeys. Safe travellin’, amigos!

The last WER train has been late two days in a row, on Tuesday when I changed ends at EPP I found that someone had been copiously sick over the floor of one of the cars and as there weren’t any cleaners there I was told to take the train to LOU. The platform was empty when I arrived but eventually the Super and a cleaner appeared only for the cleaner to head back downstairs to get the right kit needed to deal with the job.

Last night Wood Lane told me twice that SNA was unstaffed but failed to mention that BUH was also empty as no one had bothered to tell them. When I got LES the last EAB, which was meant to have left 3 minutes before me, hadn’t arrived so I waited for that and spent a lot of time in the Pipe staring at it’s tail lights.

ATO was up to it usual tricks, stopping halfway into a platform so often I just gave up. I also lost codes completely between LAG and QUE, apparently caused by an engineering train passing the points at QUE EB.

Boris thinks these trains drive themselves but then he also claimed that every station would be staffed while trains are running. I’m off to vote.

I’m having a run of signal problems, at the weekend I lost codes going into WHC sidings and when I called up Wood Lane they told me that the problem had been intermittently springing up all day. Last night at NOR they called me up to say that they were having problems getting the trains in at WER and that I was to hold when I reached RUG.

When I got there the Station Super checked how many passengers were on board; if there were only a few they suggested getting taxis to ferry them to WER and I would go into the depot from RUG. If there were too many I’d have had to carry out The Procedure and then wait until they could get the Techie up in a taxi from WHC to fix the problem.

Fortunately I was empty but as the shunters had been expecting me to come in from WER I had to wait until one of them walked over from the west side to set the points for me. As the roads were now full of trains that had been stabled earlier I had to leave mine on the east side of the depot and trudge through the rain to WER.

Other than that and the usual rain/ATO problem not much happening out there but here I had over 4000 views in the last month. Gosh.......