My apologies to Olivia, the new TOp who forgot to open the doors on the first weekend of Night Tube, it seems whoever told me the story embellished it somewhat and she never actually left the cab.  To be fair at one time or another we’ve all forgotten to open the doors when finishing our shift or going on a meal break but none of us were unfortunate enough to have a BBC 3 camera crew in attendance.

I’ve not heard any entertaining stories from the second weekend of Night Tube but there was a rather unpleasant rumour going round that some female TOps were refusing to walk down Wood Lane between WHC station and the sidings under the Westfield as it was unsafe to do so alone.  I've asked around - DTSMs, union reps, Night Tube TOps - and it seems it simply isn't true, it never happened, a steaming pile of grade A bullshit, complete and utter bollocks.

One of the people I spoke to even gave me the name of the person who started the rumour and sadly it doesn't come as a surprise, the person mentioned has made disparaging remarks about female TOps in the past.  Thankfully I've also been told they're going to be leaving soon and I suspect they won't be missed.

The Notting Hill Carnival came and went, despite there being record arrests this year we didn't seem to have much trouble on the Tube apart from the overcrowding.  The platform at NHG got so crowded on Sunday afternoon that we were having to hold trains on the WB, moving up one station at a time while the platform was cleared and by the time I left NHG I was 16 minutes late.

Yesterday was my rest day so I went to Dagenham to see Old Mother shrugged which now takes a lot longer as the Gospel Oak to Barking Line is closed for electrification work but travelling on the District Line I saw a gentleman returning home with his costume after what appeared to have been an exhausting weekend.  Must be hard work dancing two days straight, no wonder he'd dropped off! 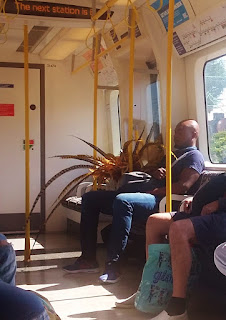 Two more jolly tales of Night Tube, the first concerns the much publicised simulation of vomit with vegetable soup during the test run on the weekend before Night Tube started.  Allegedly the staff given the task of applying the “vomit” were instructed to distribute it as widely as possible and they accomplished their task with such enthusiasm that the next morning we had to cancel a few trains as they were still being cleaned when they were supposed to enter service.

As the first night was undoubtedly a big event there were plenty of press and media in attendance along with more managers than you could possibly need.  One film crew was allowed to accompany one of our more photogenic new TOps as they worked their shift, filming events as they unfolded.  As the new TOp finished their shift at LES they closed down the train, removed their RKL220 key, stepped onto the platform and handed over to the relieving early turn TOp, all with the cameras recording every moment.

The relieving TOp pointed out that they’d forgotten to open the doors so the new TOp jumped back in the cab and pressed the open buttons.  The relieving TOp then suggested they might want to put their key back in because the buttons don’t work when a train is closed down.

All with the cameras recording every moment.
at 12:11 7 comments:


And so Night Tube has finally arrived.  The predictions of trains being mobile Sodom and Gomorrahs proved to be unfounded, perhaps deterred by the noticeable presence of the BTP who seemed to be everywhere, desperately roaming the line trying to find a train or station that didn’t already have BTP on it.  While things seem to have gone well from the public perception there have been rumours that things didn’t go quite so well behind the scenes and while I would usually try to verify whether these rumours are accurate I’m going to share them anyway simply because its too tempting not to.

The first thing I heard was that a number of the part time TOps didn’t last long enough to even see the start of Night Tube, the numbers quoted vary but it seems that when finally confronted with the prospect of working Friday and Saturday nights for the foreseeable future it was too much for them.  The plain fact is that we do have a high turnover with staff, for some the reality of working on the Tube isn’t quite as attractive as they imagined it to be, whether it be the shifts or what the job actually entails.

As most staff start out as CSAs this usually isn't a problem but it slightly different if they’ve spent four months training up as a TOp only to decide they don’t want to be a TOp after all.  Even if they’ve been a CSA or some other job that involves shift work they aren’t necessarily going to enjoy being a TOp, when I trained there I was with an SAMF for London Bridge who was also going to WHC, they lasted 6 months after their "sweat day" before they went back to stations because they couldn't stand the isolation of being in the cab on their own.

Another rumour was that there was a signal failure at LOU at some point which as I mentioned has trains moving in and out of the sidings throughout the night, something I’m told has already been the subject of complaints from the residents in the vicinity.  Also at LOU one of the new TOps supposedly managed to SPAD the signal on the middle platform coming out of the depot, not easy as the signal is a long way past the stopping mark.

However the prize for most interesting rumour must go to the tale of the TOp who went into HAI depot and seems to have got somewhat confused.  From the platforms at HAI there are two ways into the depot, either you go straight in or you go up the wash road, into the sidings behind GRH (known as the North Neck), change ends and then into the depot itself.

Allegedly the new TOp took the train through the wash, up into the North Neck, thought that was where they were to stable it and started walking back to HAI station.  All ended happily but I’m sure somebody will be checking to see which IOp signed off that particular TOp as fully trained on their HAI depot moves.


Recently I suggested that the rise in accidents at the Platform Train Interface was a result of stupid people paying more attention to their smart phones than where they were going but it seems the stupidity level has been given a boost.  Earlier this week “HSE Bulletin 22 in 2016” went up on the notice board to highlight the danger of Pokemon Go on the railways.

No, honestly, this is not a joke.

According to the bulletin “There have been reports of players attending railway stations and level crossings to try and capture the Pokemon characters they believe to be around.  Players are often so absorbed in the screens of their phones that they fail to appreciate their surroundings and the inherent dangers around them or whether access to an area is restricted.”