My first day on the Olympic timetable and apart from Stratford itself it wasn’t noticeably busier than a regular Sunday though the more frequent trains may have had something to do with that, had we been running a normal Sunday service the platforms might have been a bit more crowded. That being said the real test will be on Friday when the stadium itself opens up.

A friend and I did invent an event that should have been included in the London 2012 Olympic schedule; Boris Bike Relay. It starts with a train arriving at Waterloo, the competitors jumping off, racing to the nearest Boris Bike docking station, getting a bike out, racing to Victoria, putting the bike back and taking out another and so on and so on around the major terminus stations of London. No allowance made for the bikes getting jammed or your credit card not working or being unable to find an empty docking space or getting nicked by a copper for riding on the pavement, the first one back to Waterloo, get a seat on a train and open up a copy of the Evening Standard wins.

Needless to say this was devised after several hours in a pub ………..

Despite my best efforts to avoid anything Olympic I ended up watching the opening ceremony on TV last night and I have to admit that I was impressed. I walked out of LEY station about 11pm and was confronted by hoards of Victorian nurses walking along the High Street but not a single Mary Poppins.
at 09:02 No comments:

It was noticeably more crowded outside the peaks over the last couple of days with a lot more people obviously not familiar with the Tube, you can spot that look of bewilderment even over the CCTV. I’m off until Sunday and it will be interesting to see how things are once the Olympics actually start. The worrying news is that WHC are so short of TOps they’ve been asking other depots to send spares and I’ve been told that there are uncovered duties while the Games are on, whether we end up cancelling trains remains to be seen. Not that it’s my problem, I can only drive one train at a time.
at 10:23 No comments: 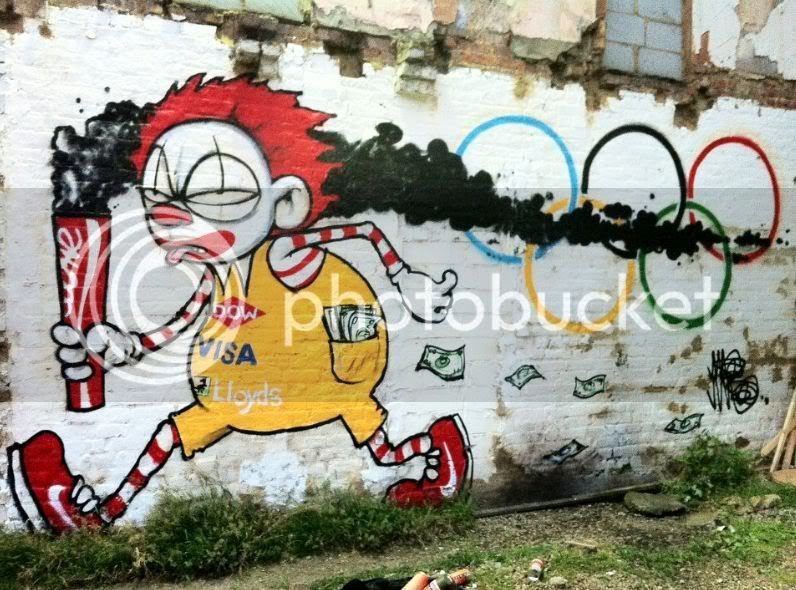 A truly wonderful piece of street art from Mau Mau, it lasted 6 days before Ealing Council came along and painted over it.

Well summer has finally started at last, time to open up those cab doors and drive in Coded Manual. It also means that passengers start dropping like flies from the heat and the number of Passenger Emergency Alarms activated soared along with the temperature. Fortunately every time Wood Lane called a “platforms and hold” I always seemed to be either going in the opposite direction or it was behind me until my last trip of the night when I got caught at BOS for a train stopped at STP. For whatever reason the cause of the delay was never relayed to us so I just tried to keep my passengers informed and amused. It was only when I was filling in my overtime request that the DTSM informed me that a gentleman had been engaging in some inappropriate touching of his fellow passengers. Must be the weather……

I understand there was a bit of bother Monday night but it was my day off so I missed it.

Yesterday morning the subStandard announced that the RMT had come into possession of a document suggesting there will be trials of the new driverless train system on the Jubilee Line in the autumn during engineering hours. Seeing as there are no plans at the moment to convert the Jubilee to NoPO it seems highly unlikely that they’d be testing there rather than on the Waterloo & City where LUL have said they will be holding trials sometime after 2014.

As of yet RMT haven't produced the document and TfL released a firm denial yesterday afternoon through the BBC. LUL is a fine place for rumours so this could be Bob just trying to work up a suitable level of paranoia but at the moment the happiest people are the Tories at the GLA who still seem to believe Boris’s suggestion that driverless trains could be here tomorrow. I’m not checking the job ads just yet……

The Olympic Duty Rosters turned up while I was on leave, I won’t be working the opening and closing ceremonies but I do have two weekend shifts longer than the usual 8 hours, one of which finishes after 01:30. Not sure how much extra I will get paid but somehow I don’t think it’s going to be anywhere near the £1800 the Daily Mail, the Sun and the rest of the frothing-at-the-mouth Tory press were predicting.

On an earlier post someone asked in the comments why we have spares. Yesterday when one of my colleagues was booking on they told the DTSM that they had used an over-the-counter remedy for an ailment. When the DTSM consulted the list of medications its okay for us to use and carry on working it wasn’t listed so they couldn’t legally book the TOp on for their duty.

Fortunately we had one spare available who was able to cover the shift otherwise we’d have had to cancel one of the last trains. That was me.

Back at work and little to report other than I’ve spotted a few Olympic volunteers, or Game Makers as they’ve been titled, heading towards Stratford. Adidas obviously designed the uniform with sunny weather in mind as everyone I’ve seen wearing it looked cold with their head buried as far down into the collar as they could go and their hands firmly shoved in their pockets. 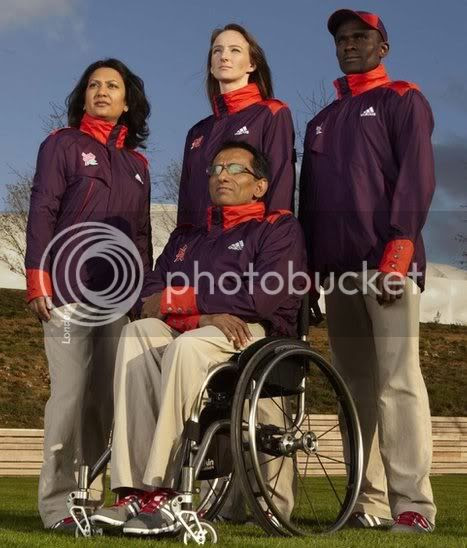 While we're on the subject of crimes against fashion I’ve finally managed to track down a photo of the hat Philip Treacy designed for Tube staff back in 1998 for the Millenium, sadly it doesn’t show a side view and convey the pure horror of what was nearly inflicted upon us but the front was a lot taller than the back. 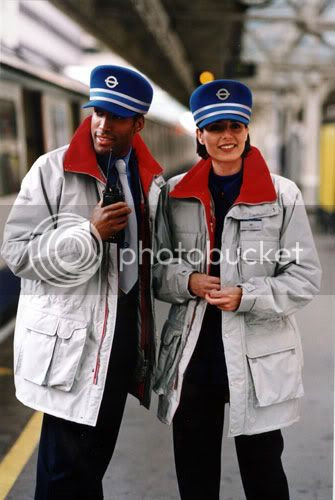 Unite and the bus operators will go into a third day of negotiations at ACAS, hopefully there’s good news tonight and the buses will run tomorrow. Meanwhile bus workers were protesting outside a meeting between Boris and transport secretary Justine Greening at law firm Freshfields Bruckhaus Deringer in Fleet Street. 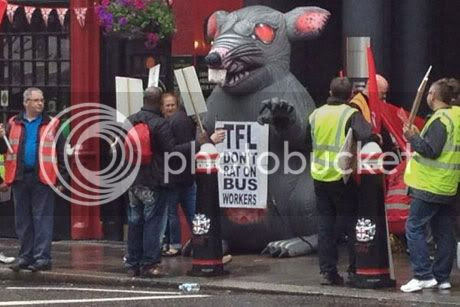 So here’s my question; where do you get an 10ft tall inflatable rat?

Update: What a wonderful thing Google is. Apparently inflatable rats are very popular with unions in the USA, the first one was made by Big Sky Balloons of Chicago back in 1990

They even merit a wikipage!

Just a quick note to say that very little happened last week and I am now off until Sunday 15th. I was meant to have two weeks in August but someone with kids asked me to swap and I’d rather avoid being off work when the schools are out. Despite the influx of new TOps we still had duties uncovered last week and I ended up covering a whole turn when spare. The Olympics are going to be fun.

On the industrial action front the planned strike by ASLEF TOps on the Piccadilly was called off after negotiations but the RMT strike at the Piccadilly Line control room is still on the cards. I don’t have any details of what the grievance is other than they aren’t happy with the move from their current location at Earl’s Court to a new place at Hammersmith.

Meanwhile the bus operators and Unite will meet at ACAS today to try and sort out the bonus issue but I doubt if the bus drivers attitude will have softened seeing as staff working for SERCO on the Boris Bikes have just been given an Olympic bonus. Unite did offer to meet last week but the bus operators declined the invitation though Stagecoach, who run a lot of routes in and around Stratford, broke ranks and made an offer, as yet no news as to what it was or if it was accepted by the drivers.

Stagecoach was founded by Brian Souter and his sister Ann Gloag, both deeply committed Christians who donate large amounts to the SNP and are famously anti-union. Trawling through Private Eye I spotted that the church sister Ann attends when staying at one of her two castles needs £50k to repair the roof. She made £37m last year and could easily have spared the cash but instead she coughed up £30k and left the other parishioners, who probably didn't make quite as much last year, to find the remaining £20k.

Apparently charity begins at home, not at your second home. Grease up that camel…….