My favourite broken record, Tory GLA member for Merton and Wandsworth Richard Treacy, is once more complaining about union ballots, in this case the RMT conductors on LO.  They voted 89% in favour of strike but only half of those balloted bothered so he’s bitching that the strike action is being pushed through by 43% and demanding that the rules be changed as it is wrong that a minority should cause disruption to London.


In the 2012 Treacy was elected on 43.1% with a turnout of only 40.9% which means he gets his place at the GLA thanks to 17.6% of the voters of Merton and Wandsworth.  Obviously we are left with the question of what has caused more grief to the lives of Londoners, the LO conductors two day strike action or four years of the tediously repetitive Treacy at the GLA.
at 10:24 1 comment:

Here endeth the Boxing Day strike and about bloody time.
at 14:23 No comments:


Some clever dick has been busy with Photoshop. 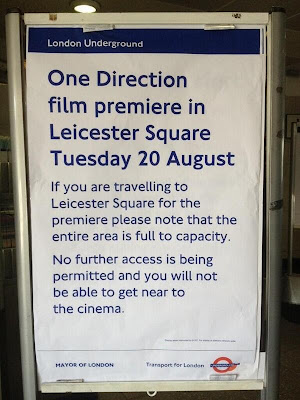 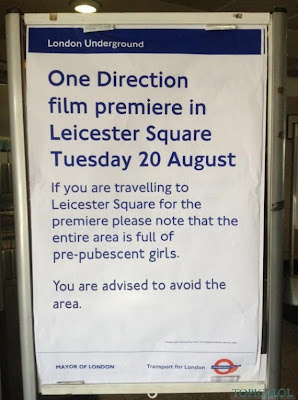 A quick addenda to yesterday’s post, apparently RMT derided the deal on Boxing Day working at the end of last month as it doesn’t meet their aspirations which is all rather amusing as prior to this they’d shown little or no interest and to the best of my recollection had made no statement about it whatsoever.  The only interpretation I can come up with is that having sat on the side lines throughout this dispute RMT are now peeved that ASELF and LUL sorted this out without involving them.


I don’t see there being any actual consequences from RMT’s sour grapes as I’m sure the RMT TOps will be more than happy to either opt for the day off or pocket an extra £350 before tax.  What I do find mildly irritating is it’s only on LUL that we have this sort of inter-union rivalry, on the rest of the UK railways the unions cooperate quite happily, an example of this being up on LO where my good friend the RMT conductors’ rep was invited to speak at the local ASLEF branch meeting.
at 11:53 No comments:

Yesterday my dear friend Treacle asked me why I wasn’t blogging and to be truthful my heart just wasn’t in it, whatever inspired me to start writing back in 2010 seems to have faded this year but then the last eight months have been rather stressful one way or another.  Another factor could be that since I’ve given up night shifts it seems that there is less to write about, I certain get far fewer amusing and entertaining drunks to wake up when I reach EPP than I used to but then there’s also far less vomit to deal with.


A couple of weeks ago I got my ballot paper for the vote on the Boxing Day deal, I happily voted to accept LUL’s offer and we should be getting the results soon.  Hopefully this will mean an end to the dispute and also that I never work another Boxing Day between now and retirement.  Someone else can earn the extra £350, I can always get more money, I can’t get more time before my date with the undertaker.
It looks like RMT will go on strike over the planned ticket office closures although it remains to be seen if TSSA go out with them this time, the joint strike at the end of 2010 had absolutely no effect and I would imagine morale among station staff must be rock bottom.  This was the plan all along, from the moment LUL signed the deal on Oyster Cards in 1998 they were looking to take the human element out of ticket sales, that was obvious to me despite assurances from management that there would always be a need for staff in ticket offices.  That was one of the reasons why I asked for a transfer to trains, I knew that management were lying through their teeth and that staff cuts were on the way.
What is rather ironic is that when Boris was elected in 2008 he said that he’d stop the closures that Ken had planned and ensure that every station had a ticket office open but everyone seems to have forgotten that, maybe it’s because he’s broken so many of his promises that no one expects anything else from him.  It should be noted then although Ken was planning to close ticket offices he was intending to put more staff on stations rather than less.


Up on the Overground they’ve announced plans to move to “Driver Only Operation” and dispense with conductors which everybody refers to as guards just as everybody still refers to DLR PSAs as “train captains”.  RMT have voted for a strike but their claim that this will lead to safety issues is undermined by the fact that two of the lines on LO have been working DOO ever since the new trains were introduced.  As the trains currently operating with conductors came with CCTV in the cab it looks as if this was the idea from the start, just as Oyster was intended make ticket offices redundant.


I don’t believe that RMT think they’ve a hope in hell of saving the conductors’ jobs, they’re just trying to get as good a deal as possible out of LO for their members who will either be taking voluntary redundancy or being displaced to other areas of the business.  Having been told that there is going to be a lot of work done on LO stations with the introduction of ticket barriers and lifts I suspect that there will have to be the introduction of the equivalent of a station supervisor grade which the conductors that do stay will be ideally suited to step into.