A couple of people have pointed out that I’ve been name-checked by Dave Hill over at the Guardian in his London’s Top Bloggers section and I am somewhat gobsmacked. Tis an honour, many thanks DH.

A friend who is a guard over on London Overground tells me that the station staff at Midland Road feed the cat so next time I see one I will ask if they have a name for her though they might need a few more names pretty soon as she was very obviously carrying kittens down there.

Clive is very well, thank you, I’ll be cleaning his tank while spare tonight.

One interesting tool on this blogging site is you can check the stats of how many people are reading this, which bits they are reading and where they are accessing from.

God dag og velkommen to whoever is popping in on a regular basis over in Norway.
at 12:10 1 comment:

First night back and the DMT on the desk was happy just to have some night turns booking on. Apparently last week one of the four night turns had been left uncovered and by Saturday night two more were off sick which left no one available to drive the last two WB trains. Next week we start the new timetable and we get an extra ten places on the roster which means ten TOps come out of the “pool” and we have ten less staff to cover sickness, leave, training etc.

In LUL’s in house magazine “On the move” we were given a hint of the service we will be running during the Olympics. On the Central, one of the four lines expected to see the biggest demand, they want us to start 30-45 minutes earlier on a Sunday, last trains to run an hour later than usual, an enhanced service every day and when the Olympic Stadium is in use, days 7-16, we will have an third “peak” between 10pm and 11:30pm.

Now there are rumours that in September they will start training up new TOps but due to the length of training and the numbers of training staff the best we could hope for is around 100 extra TOps spread over the ten lines. All of which leaves me scratching my head wondering how we are going to have enough bodies to run the enhanced service they are proposing but then I am but an ‘umble train driver and such things are obviously contemplated by the great minds that wander the marble corridors of 55 Broadway.

There were no unstaffed stations last night though at STR the CSA was so late that by the time they turned up I’d already called Wood Lane to get clearance and at NHG they managed to stand at a point on the platform where I couldn’t see them until the crowd had dispersed. ATO failed one car short coming into GRE EB; it’s like I’d never been away.
at 11:53 No comments: 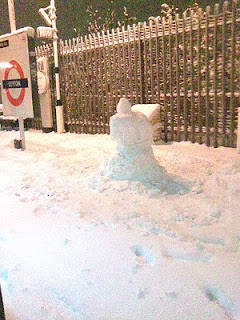 From 18 Dec last year (see blog entry “On Saturday it snowed. Lots.”) here’s a snowman somebody built on the east end of the EB platform at LEY.
at 13:34 No comments: 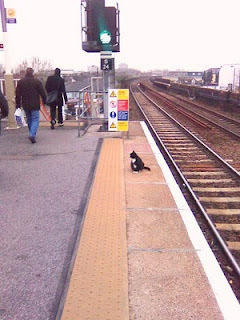 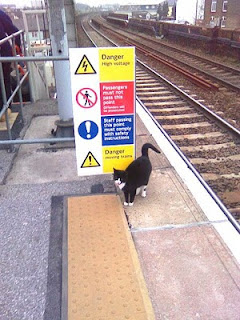 Although I’m not back at work until Sunday I though I’d share these two photos I took yesterday of the cat that I’ve seen hanging around Leyton Midland Road station on the Barking – Gospel Oak line. I’d love to know if she lives in one of the houses near the station or if she’s a stray but she seems to keep a careful watch over her passengers, maybe London Overground should give her a job, perhaps something in pest control.
at 08:00 2 comments:

Spare Saturday night, all there was for me to do was to finish off a LOU shift, LES-EPP-LOU and into the sidings. The only thing of note was that every car had empty bottles or cans in them, with either split beer or vomit just to give it that proper party atmosphere. So much for the drinking ban…….

I’m off for three weeks for my “winter” holiday, it should have been in January but I managed to swap for February as it’s my birthday next week and I will be far, far too old. After that I won’t have my “spring holiday” till the middle of June. That might seem a strange interpretation of the seasons but on Wednesday’s GLA Transport Committee Mike Brown was asked when work would be finished on the Jubilee Line he said “spring” and when pressed for a month he reckoned “April, May, could be as late as June”.

So until Sunday 27 Feb it’s goodbye from me and happy travelling to you all.
at 12:19 3 comments:

Following last nights delays caused by having to wait for station staff who weren’t there I called up Wood Lane before I left EPP to see if there were any absentees and they assured me that tonight we had a full house. Sure enough someone was waiting for me at every station up until SNA where the platform was noticeably empty. When I called Wood Lane they repeated that they had been assured that someone would be there but when they tried to contact the Station Super there was no answer. As I have said many times communication is not a strong point at LUL.

Still at least the week was brightened by a highly entertaining drunk who staggered off at RED, slammed backwards into the train and then staggered a bit further down the platform before colliding with the train once more.

There was no way I was moving the train with this fellow bouncing around like a pinball but the Super spotted all this and was heading to our gallant inebriate’s assistance. Before he could reach him the desperately over-served gentleman decided this wasn’t his stop and boarded the train. The Super gave me the “right” with understandable haste as once the doors closed and the train left he was somebody else’s problem.

All the way to HAI I was watching for a reappearance but he stayed on till the end of the line, negotiated Plat 3 somewhat unsteadily, wobbled off down the stairs and into the night.
at 04:30 No comments:

Wednesday night was uneventful though Thursday morning we had to wait for the "road numbers", the list telling us which train is which in the sidings, as the DDM at HAI couldn’t get the new fax machine to work. Apparently the idea of emailing the info to the DMTs and getting them to print it off is beyond LUL’s imagination.

Just the one Auto failure at THB EB, the passengers must be used to it there as they all stood and waited, normally they start walking towards the train thinking that it's stopping where it is despite the four cars hanging off the back end of the platform.

Thursday night was equally uneventful except that THB, WOO and SNA were all unstaffed, not that I was told this until I’d sat on the platform for a minute and then called up Wood Lane to confirm.

Two more nights and then I’ve got three weeks off, it was meant to be two but I asked for the extra time as I’m owed it for all the bank holidays I’ve worked in the past year and I need to do a few things at home. I fully expecting to be told there was no cover available as had been the case the last few times but Hallelujah they gave it to me.
at 03:59 No comments:

The WER branch was very foggy, ATO failed halfway into RUG EB but other than that everything went well. Even SNA was staffed though when I asked the Super if they were there for the rest of the week they told me that they were only doing the one night shift

The proactive Super at EPP woke a sleeper and then put him back on my train but he was still asleep at LOU. After I’d finished the line was closed down because some ne’er-do-wells nicked cabling again.

Monday night was quiet, nothing of note other than SNA was unstaffed but then that’s hardly news. The station staff reshuffle comes in on Sunday, ticket offices opening times will be cut and hopefully they’ll sort out the rosters so that there are Station Supervisors where they need them when they need them. RMT and TSSA are in talks with LUL at ACAS over this, I don’t think either of them are in the mood for any more strikes as the four 24 hour stoppages have done nothing to halt LUL’s plans, they’re just trying to salvage what little they can from the mess.

In the morning Auto just refused to work at DEB EB, no message on DTS to indicate why, took the train Coded to LOU, switched back to Auto and it carried on as normal. Oh one thing, there are some TOps who’s hygiene regime is somewhat less than scrupulous and last night I relieved one of them at the start of my duty. The only thing to do is stick the air con on full blast, not something you really want to do in January.

Spare on Sunday night, earlier a train had been taken out of service and then later someone decided to bring it back by re-numbering another train. In the intervening period the TO who should have been on it had been told to go home so I ran it from LES to WOO via HAI, then back to HAI and into the depot. I got a taxi back to LES and had to endure a frighteningly stereotypical taxi driver rant against immigrants, benefit claimants and Gordon Brown. We got to LES before he had a chance to start on women in football.
at 04:08 No comments: